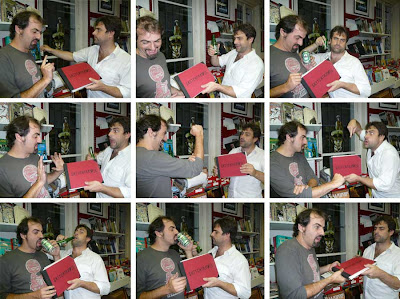 French Comic artist Dominique Bertail (casterman, dargaud, spirou mag, fluide glacial, bayard...)only needed one week to bring his astonishing contribution to the Sketchtravel's sketchbook. Dominique is in the middle of his brand new comic book "Ghost Money" promotion, I aware geeting him at this period was a big challenge. Inspired by the race look of Sketchtravel's adventures he painted this funny action scene. You will notice the wink to the Lou Romano's piece, previously done in the Sketchbook, about one year ago. Indeed, Dominique
is a big fan of Lou Romano. As you can see in the other pictures, Dominique gave the Holy Sketchbook to Pierre Alary. The alcoholic relay took place at http://www.boulevarddesbulles.fr/ last saturday where Pierre had a signatures for his new book Sinbad. The Sketchtravel's Sketchbook is not Parisian anymore but Belgian since Pierre lives in Brussels. Stay tuned !

(Pierre Alary is on the left, Dominique Bertail on the right.)
Publié par Gerald Guerlais à l'adresse 1:54 AM